Hello there! Hope the game development is doing alright.

As pictures of the game’s solar system map was being posted on the discord, I realized how crazily out of scale the planets and asteroids are, as seen here:

Now from what I understood, they are big like that so that we can select them better? Or something of the genre? What’s stopping the implementation of a map like ksp has, like say this:

Or this, as another example:

I was also made aware that they couldn’t do this because of the sheer amount of objects being simulated? Is that true?
Will the map have options at least about this? I am simply wondering why it has to be this way rather than the ksp system.
Thank you in advance for answering.
Top

It is a bit janky looking, I have to agree. The game is still in earlier stages, and I hope there can be a nicer representation more like the KSP maps you link. Or maybe more to the point, the way KSP displays asteroids and orbital debris.
Top

I'm afraid I don't understand what you're asking for. Of course the objects aren't to scale because things are so far apart in the Solar System multiple objects wouldn't be visible on almost any scale in which you could see multiple objects outside a single planetary system; they would resolve to less than a single pixel. Looking at the KSP pictures, are you asking we replace icons with filled in circles?

The visualization uses icons when zoomed out so you can find an interact with objects. It switches to actual-size models when you get close enough that the model would be larger than the icon.

With 330 objects in the max game (and modders able to add more), showing orbital tracks for every object would be a nonfunctional UI. So we only show them for the major bodies and the body you have selected.
Top

johnnylump wrote: ↑Mon Apr 26, 2021 2:53 pm I'm afraid I don't understand what you're asking for. Of course the objects aren't to scale because things are so far apart in the Solar System multiple objects wouldn't be visible on almost any scale in which you could see multiple objects outside a single planetary system; they would resolve to less than a single pixel. Looking at the KSP pictures, are you asking we replace icons with filled in circles?

The visualization uses icons when zoomed out so you can find an interact with objects. It switches to actual-size models when you get close enough that the model would be larger than the icon.

With 330 objects in the max game (and modders able to add more), showing orbital tracks for every object would be a nonfunctional UI. So we only show them for the major bodies and the body you have selected.

You could say that, yeah. I know my first reaction to the map was just confusion. I-and most others, I imagine-are used to seeing like a circle, or a dot, a shape, etc. Doesn’t have to have a line for obit if it’s not important, that’s fine. It’s the icons I have issue with, and probably others do too. It’s so...jarring. Out of place. Especially with Earth and I think it’s Mars? Perhaps you could do like spore or something, which had a bright shine where a planet was, but as the mouse would pass over it the planet would pop up? 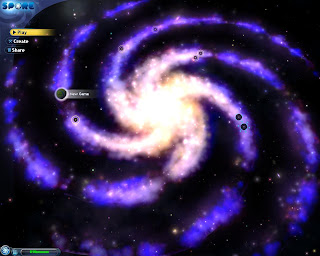 Yes, it is very vauge and horrible quality but it is the only pic I could find where you can see the difference between unselected and selected planets.


Now, I can’t speak for others but I do know it’s been spoken about in the past in the discord.

I guess the point is the icons are too big, really.

Edit: I just re-read your message, do you mean to say that the icons are only this big when you select them? Like click on a planet and the icon gets bigger?

Edit2: Here’s another example of a possible map, this is closer to what I was imagining the map of terra invicta to be since it was big on realism, at least that’s what I got from the kickstarter description. So um, you can imagine my surprise. Pic is from universe sandbox, dunno if 1 or 2. 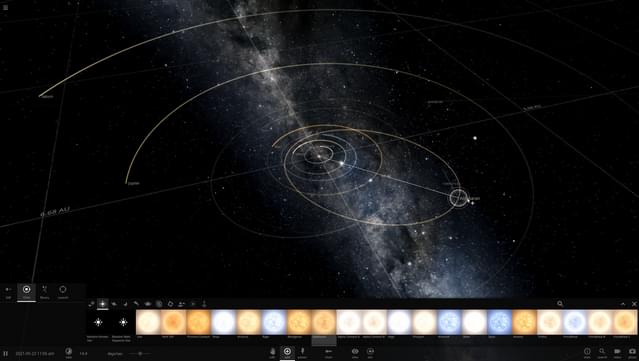 That bottom one is pretty. But also nonfunctional for our purposes; I count about 8 objects portrayed. In TI, the text name for each space body would take up more space than the icon to be legible, and you'd see a mess of words instead of a herd of 40-pixel asteroid icons in the Belt.

I may understand where your concern is coming from, in that particular image, the player has zoomed out so you can see KBOs, which has squashed the asteroid belt together and looks busy. Right now icons disappear when the zoom puts them in the same screen location as their parent body, which is why Venus and Mercury are not visible. The icons are indeed buttons and are sized with sufficient resolution so the mouse can find them. Here's an inner-system look, which is achieved by scrolling the mouse wheel inward when interacting with that UI:

It's still a busy Belt but it's a lot more digestible at that scale.

So I guess I'd disagree that we've violated the tenet of "realistic" by blowing up icons so they can be interacted with in the interface. It's possible we could knock them down a few pixels, I guess, so there's less overlapping at certain zooms, but I don't see any difference between our representation and KSP's with blown up spheres for planets, except ours represent the real thing rather than use a primitive shape. Again, our actual models are their true sizes and at proper distances when you zoom in sufficiently to interact with them; what you're looking at is an interface for players that displays relative positions of Solar System objects.

I'd also note we offer players a chance to play with a smaller Solar System, down to about 65 objects, if this is too busy for them.
Top

Yes, I’m aware it was only 8 objects. Doesn’t mean it can’t go much much higher, I’d imagine. It was an example.

And yeah, I once thought the triangles and other shapes had the planets in them, as at that distance they would be extremely hard to see and said shape was so you could select them. Instead of having uh, blown up planets, I think? At least, from the games I’ve seen, they all do a variation of this. The planet is a speck in the distance yet have this faint circle, line, shape, whatever-so that it’s actually selectable. Like in Elite dangerous when you travel to a far off planet. You have a yellow unfilled circle around it, then as you get closer it gets bigger and bigger... (couldn’t find a pic)
Yes, I’m aware it’s a completely different game.

Tho I am confused. The planets are still really big. You said when we zoom in they get smaller?

I am confused by what you mean by taking up more space for icon to be legible and seeing a mess of words. Isn’t the description in a small window on the upper left?

Actually, I think I’d need a video to properly understand the zooming in and out and stuff.

So. If I understand correctly...the icons are not planets/asteroids? They get smaller when you zoom in? What about looking at Jupiter or Pluto from Earth, then? Would we have this huge Pluto so that it’s selectable? In short this is what I’m concerned about. If they’re that big at the distance the player posted the pic from(especially the asteroids), won’t Pluto be ridiculously huge (at least huge as in considering how far it is, I’d imagine it does seem big up close!) when looked at from Earth? Instead of, ya know, the speck it should be, or at least I’d imagine it to be a really small speck.

Actually...now that I think about it...is this a map screen or just a really really zoomed out normal play screen, so to speak?
Top

The pictures are of the primary user interface for selecting and viewing space objects. It shows accurate positions of space objects at a point in time (with the Sun as origin). The icons are intended to provide information content about the space object (asteroid versus planet, plus the presence of player assets). The icons do not change size. The icons are interactive so the player may select them to get details and zoom in sufficiently for the model to render at a size that is larger than the 40px icon.

This is what you get when you 1) zoom in close enough for the model to render 2) select a user option to not render icons when a model is visible. In this case, Both Europa and Jupiter are large enough to render their models, while everything else is removed:

Ok....so...what do they look like from a faraway object like earth? And is the player in the pic you posited, whether it be you or someone else, closer to Europa then Jupiter or at the same distance away? I don't remember Europa being that big. Last I heard it's the size of the moon. Eh. Maybe I'm nitpicking at this point.
But how do they look from far away? Like lets say you're on -actually, is there freeroam, like, can you use wasd to just go off into a particular planet? Or is it only the solar system map?

So. If you're on earth and look up at or towards Jupiter, will the size be like on the solar system map, or a speck as it should be? How do they look at a distance from say, a faraway asteroid or whatnot?

If I'm on earth and see a Jupiter like the one on the map, I'd find it weird and immersion-breaking. Unless, ofc, I'm in the map screen.

I think I'm still slightly confused but get it. So Jupiter is only like that in the map screen yet if you look at it from a ship in earth orbit it'll be sized appropriately?

Edit: Nevermind, someone showed me in the discord. Guess not...a bit of a shame really. Oh well. We'll see when we get there.
Top

Europa looks big because the camera is close to Europa. Jupiter is a large object further away. It's like how a person can look as tall as a skyscraper if the eye seeing them both is in a certain location.

I'm giving up on trying to explain it to you with words and pictures. You'll have to wait for a video.
Top

Yes yes, I also spoke of the possibility above. About Europa being closer.

But yeah while I will wait for a vid, I doubt it’ll be like I imagined. At least, that’s what the discord pic showed me. Planets aren’t to scale, even out of the map. Was hoping that once you’d get out of the solar system map it’d be more to scale. Seems not.
Top

The solar system viewing mechanics are akin the ones in the above videos.

Esthetically, the solar system map in Nexus is superior because it uses stylized small icons when really zoomed out from an object and it also has a unified color scheme which it gives a more neat, clean, easy to read and scientific look.

Also my suggestion it would be that on the solar system map screen, a list with all the objects would be welcomed, governed by powerful/in depth filters

If I were a dev, I would copy Nexus's planetary system depiction!